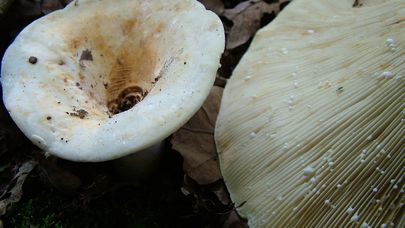 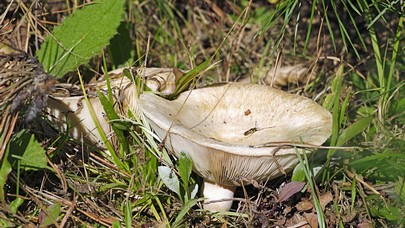 What You Should Know

Lactarius vellereus is a large mushroom in the genus Lactifluus. It is one of the two most common milk-caps found with beech trees, with the other being Lactarius subdulcis. The fruit body has crumbly, rather than fibrous, flesh, and when this is broken the fungus exudes a milky latex. The mature caps are white to cream, funnel-shaped. It has firm flesh, and a stipe that is shorter than the fruit body is wide. The gills are fairly distant (quite far apart), decurrent, and narrow, and have brown specks from the drying milk.

Lactifluus bertillonii is closely related and very similar but has hotter milk. Another similar, but phylogenetically distant species is Lactarius controversus, distinguishable mainly by its white gills and lack of rosy markings on the upper cap.

This mushroom is considered inedible but is consumed in Eastern Europe and Russia where they have a liking for hot mushrooms.

This mushroom was described in 1821 by the great Swedish mycologist Elias Magnus Fries, who gave it the binomial scientific name Agaricus vellereus. It was Fries himself who, in 1838, transferred this species to the genus Lactarius, thus establishing its currently accepted common name Lactarius vellereus.

Lactarius, the generic name, is Latin and means producing milk (lactating) - a reference to the milky latex that is exuded from the gills of milkcap fungi when they are cut or torn.

The specific epithet vellereus also comes from Latin and means soft and fleecy (with a surface like very fine velvet).