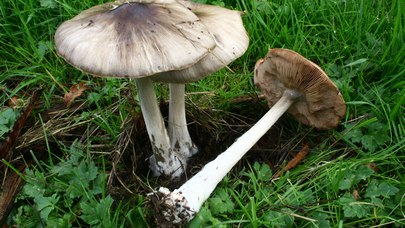 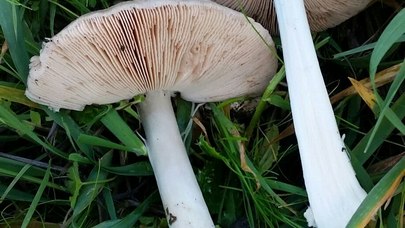 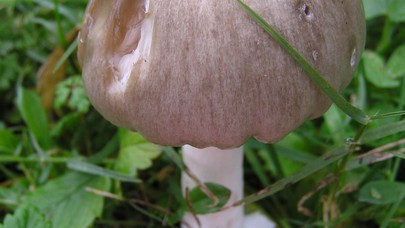 What You Should Know

Volvopluteus gloiocephalus is a species of mushroom in the family Pluteaceae. For most of the 20th century it has been known under the names Volvariella gloiocephala or Volvariella speciosa, but recent molecular studies have placed it as the type species of the genus Volvopluteus, newly created in 2011.

This mushroom is most often seen in fields that have been harvested of a grain crop (or occasionally some other food crop such as cabbages). It is even more widespread and abundant in southern mainland Europe, often recurring in the same grassy areas for many years.

The cap is white to grey, with a central umbo; its margin is striate. The cap surface is smooth, viscid or sticky. The stem is slender, bulbous, with a white sheathing volva, without ring. The flesh is unchanging; its taste is mild, radish-like; the odor is faint, unpleasant of radish or raw potato; its texture is fibrous. The gills are white, then pink brownish, free, crowded. The fruiting period takes place from April to November.

Volvopluteus gloiocephalus is sometimes mistaken for an Amanita because of its stature, free gills and volva. However, at maturity its salmon-colored gills and spores easily distinguish it from Amanita species.

Polysaccharides extracted from the mycelial culture of V. gloiocephala and administered intraperitoneally into white mice at a dosage of 300 mg/kg inhibited the growth of Sarcoma 180 and Ehrlich solid cancers by 90% and 80%, respectively (Ohtsuka et al., 1973).

When Swiss mycologist Augustin Pyramus de Candolle described this mushroom in 1815 he called it Agaricus gloiocephalus. Until recently its generally-accepted scientific name dated from 1986, when mycologists Teun Boekhout and Manfred Enderle gave it the name Volvariella gloiocephala. Then, in a 2011 publication by Italian mycologist Alfredo Vizzini and colleagues, the Stubble Rosegill acquired the new name Volvopluteus gloiocephalus.

Many older field guides use the name Volvaria speciosa when referring to this species, but now more authorities refer to it as Volvopluteus gloiocephalus (DC.) Vizzini, Contu & Justo (2011), with this being the type species of the newly created genus Volvopluteus.

Volvopluteus, the genus name, is a reference to the volva formed around the stem base by the remnants of the membranous universal veil which covers emerging fruitbodies, and its relationship with another pink-spored genus the shield mushrooms, Pluteus species. The specific epithet gloiocephalus comes from the Greek words gloio, meaning glue or glutinous substance, and cephalus, meaning head. Hence gloiocephalus means with a sticky head - a reference to the viscid nature of the surface of caps of the Stubble Rosegill.